On Wednesday, June 1st, Delirio Tiki Bar by Swizzle opened its doors for the first time. However, this new concept thrives from its old roots of creativity, originality, and versatility that have long flourished on the premises. The Delirio Tiki Bar by Swizzle is an extension of the Swizzle Rum Bar Team’s established mark on Miami Beach. Conceptualized and executed by Founder of Swizzle Rum Bar & Drinkery Danilo Bozovic, his friends, and the whole Swizzle team, Delirio Tiki Bar is a fun spin on Tiki culture–––a culture originally native to Polynesia. This new bar concept stands out because of its Latin American-infused details, decor, drinks, and delirium. 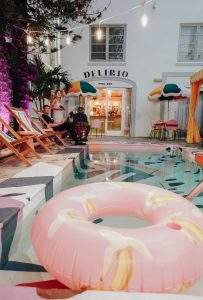 In addition to serving as the Founder of Swizzle Rum Bar & Drinkery, Danilo is also a beverage director, beverage consultant, and author. He is a Barkeep Book Author. the first one he write is Barkeep: The Guide to Becoming a Professional Bartender and the newest one Barkeep: The Art of Mixology, Bar & Cocktails. As a professional who wears many hats and has held several leadership positions, he is no stranger to the ins and outs of what makes a successful business capture the hearts and attention of its intended patrons. “The vision behind the new concept is Latin American-inspired Tiki. The tricky process is that I usually try to do concepts and projects that I am very excited about,” said Danilo.

By launching Delirio Tiki Bar by Swizzle, Danilo bravely takes on the challenge of creating something fresh and exciting in an era in which everything seems to have been done before. “Nowadays, when there’s a lot of things going on, it is hard to see something that you’re excited about…” continued Danilo. “My goal is to do as unique a concept as I can. In a market, and in a world, where everyone is interconnected through social media and everything, it is a bit harder to do.”

Danilo infuses the flavor, the soul, and the fun of Latin American culture into his new bar concept, adding a magical touch to his take on Tiki. In his approach to the design, which he handled himself, Danilo provides a darker look to contrast the gold accents throughout the venue. The wood is an integral component of the design, making the gold “pop” and hypnotizing those who enter the space. 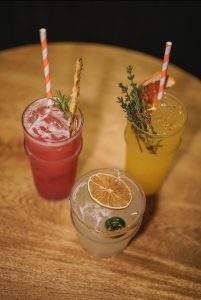 From the most noticeable detail-oriented features to the more subtle nuances, Danilo demonstrates an awareness of appearance’s influence on experience. “I try to do what I think is best for the space, and I try to envision how the operation goes…Not necessarily feng shui but something in that order where the colors and the materials make you feel a certain way,” he explained.

Because Danilo has a sense of the space and how guests may interact with it, he also elevates the guests’ experience of the venue and everything else the bar has to offer. For example, the physical environment and decorations affect the manner in which guests respond to certain drinks, the type of energy guests hope to get out of the bar, and the type of vibrancy they put back into it.

Understanding the way in which a place’s design functions in making or breaking an experience allows Danilo to better curate his guests’ fun days and nights out. In conceptualizing his designs,  so too, he considers the drinks, the concept, and the music. Danilo said, “It’s all kind of connected…It helps because when I do the menu, then I know what could work, what doesn’t work, what’s too much, what’s not too much, what’s too little, what’s not good enough and so on.”

Danilo keeps the same classic approach and mixology that he inherited from working with Employees Only. He maintains the technique that goes into making cocktails while also translating and adjusting his techniques to elevate the Tiki concept. “I really had fun with this project,” said Danilo when asked about the Delirio Tiki Bar by Swizzle’s beverage program.

Danilo continued, “It’s a limited cocktail menu but I wanted it to be super profound. I wanted to incorporate dulce de leche. We have a Dulce de Leche Old Fashion…It’s a dulce de leche wash and a Venezuelan Santa Teresa Rum and then we have a hundred proof bourbon. We’re sticking to the classic style which is the American Speakeasy style but also incorporating the flavor. That’s going to be a stirred drink. Very popular. Very nice. It’s quite delicious. I am very happy with how it turned out.” 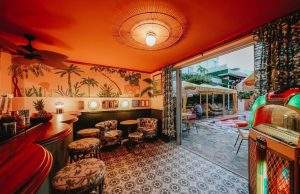 Danilo brings guests into his vision, his Belle Epoque of the Tiki culture in Latin America, his fictional musing, with the tastes of each of his eight cocktails. An example of the kind of cocktails guests can expect is the Zombielicious Hibiscus, it has pineapple-charred and Ojo De Tigre Mezcal, The Pretty Mama Swizzle made with a rum from Belize. There is also a cocktail made with rum from Bolivia, one made from Foreign Liquor from Mexico with salted blood orange, and a unique clarified punch, among other balanced, rich, and fun creations. There is even a cocktail to pay tribute to Miami called Miami Vice. It is a Brugal 1888 Rum based cocktail with a cacao liqueur that the Swizzle team makes themselves and Aguardiente Foam.

Ready to experience the magical touch of a new take on Tiki? Visit Delirio Tiki Bar by Swizzle at 1120 Collins Ave in the Viajero Hostel. Enjoy a cocktail or a ceviche by the pool and some eats such as coconut shrimp, burgers, wings, fries, etc. Every day from 1:00 p.m. to 7:00 p.m. Delirio Tiki Bar by Swizzle will offer a Happy Hour that is open to the public. This offer includes two cocktails. Also, there will be a  FSM, or First Sunday Month, event which is an industry dedicated day from 4:00 p.m. to 7:00 p.m. During this event,  industry colleagues have an opportunity to come and enjoy Happy Hour cocktails, complimentary food by Daniel Roy, the pool and a live day-time DJ. For more information about Delirio Tiki Bar by Swizzle, follow the Swizzle Rum Bar & Drinkery on Instagram at @Delirio_tiki_byswizzle or visit their website at https://www.swizzlerumbardrinkery.com/.

Get Wild This Summer with Award-winning BASBAS Liqueur