This is where we can truly say: single village, single palenque, single estate mezcal. As we deep dive into the brand’s origins with Maestro Mezcalero Fortino Ramos and his daughter (second generation mezcalera in training) Xitlali Ramos. We’ve learned that the tradition of mezcal making was almost lost in San Pablo Huixtepec but Fortino pursued his passion despite the critics of the town and continued to work the agave fields. On the agave fields, he began perfecting his technique, not only with the know-how but also by science and artistry. He started his own Palenque and made Mezcal for an array of brands in the beginning of his journey. 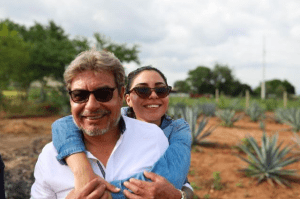 In 2015, his perseverance and dedication was paid back when philanthropist and environmentalist David de Rothschild partnered with Fortino and their family to develop the liquid for “The Lost Explorer” mezcal; they forged a sustainable and environmentally friendly brand  that reflected their own values; respecting the ecosystem and rich biodiversity of agaves.

Honoring the sacred vow between humankind and the agave, The Lost Explorer Mezcal is committed to the sustainable production of high-quality handcrafted spirits in a manner that benefits the local mezcal-producing community in Oaxaca and protects the land. Commitments in place at launch include: the Mezcalero being a shareholder in the company, rainwater conservation, the use of reclaimed wood, replanting at least three agaves for every agave distilled, fertilizer created from agave waste, and solar panels to harness energy for power generation and water heating. Workers harvested the agave  in harmony with the elements and in tune with the rhythm of nature. 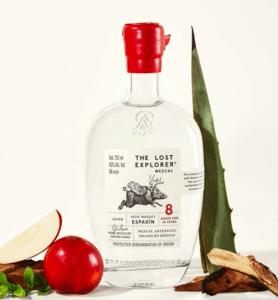 The project started with three varietals: Espadin, Tobala, and Salmiana of which only Espadin is cultivated from agave pups (Hijuelos) and matured for eight years before harvesting. Both Tobala and Salmiana are wild. It takes ten years to harvest Tobala and twelve for Salmiana – inviting people to live curiously and explore the diversity and wonder of the sacred agave.

The artisanal mezcal starts with the cooking of the single variety agave in the underground conic oven; then cooked agaves go through a multi-stage shredder. The next process is the fermentation which occurs naturally on open wooden tanks with fibers and water.

Because of their commitment to the environment, they have installed solar panels and eliminated wood to heat the copper pots on the double distillation process by incorporating gas. This way ensures that they are not only protecting the local trees, but also caring for the health of their employees. 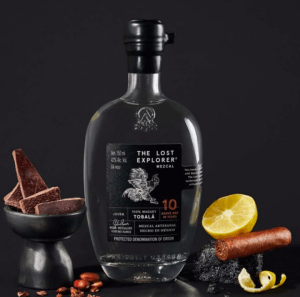 Every single expression is then bottled and sealed, bringing the true essence and character of the variety. On each mezcal we noticed Fortino’s hand, the finesse of the liquid that brings all the notes that are particular to each terruño (terroir) and agave, each one is well balanced with the right touch of smokiness. At their Palenque, they continue to grow agave Espadin and other varieties from the Karwinsky family. “The Lost Explorer” brand not only opened new horizons and prosperity to an entire village but also it brought back the passion for the craft and the innovation that new generation mezcaleros and educators as Maestro Fortino Ramos can bring for the future of mezcal making and the environment. 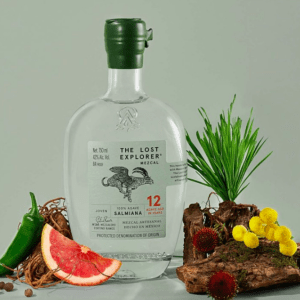 Introduced at the end of 2020, The Lost Explorer Mezcal has become one of the most awarded mezcals in 2021, having been awarded double gold, gold and silver recognition from the San Francisco World Spirits Competition, the most established and influential spirits competition in the world. It has also received the prestigious accolade of Taste Master – the best of the best across the Tequila and Mezcal category – by The Tequila and Mezcal Masters 2021, hosted by the Spirits Business.

Curious to taste and learn more about “The Lost Explorer” Mezcal? visit www.thelostexplorermezcal.com