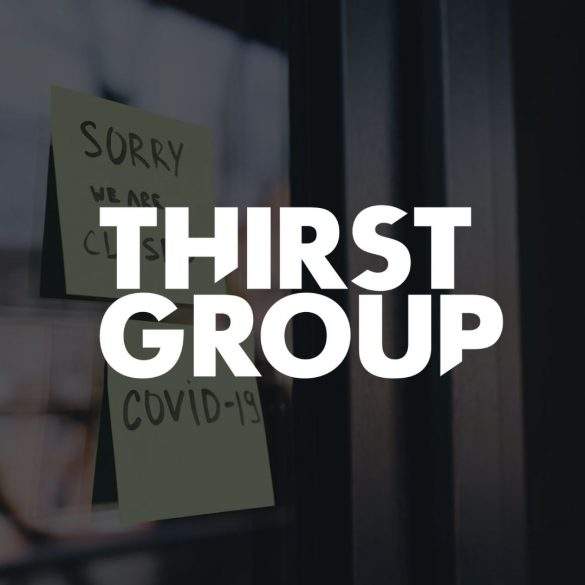 The Hospitality Industry Reimagined Security Trust (T.H.I.R.S.T.) Group became a necessary resource for bartenders and businesses as a direct result of the Coronavirus’s negative impact on the economy as well as because of the financial stress it has placed on everyday citizens. Few businesses and individuals have the means to sustain themselves for long periods of time so they have been left disenfranchised, disillusioned, and disoriented. Many establishments and those within them have emergency funds, but no one could have adequately prepared for the devastating financial burden that accompanied the virus. The T.H.I.R.S.T. Group was created because bartenders, and other members of the hospitality industry, needed a last line of defense in order to survive layoffs, closures, and an absence of a guaranteed income.

Former lawyer Nate Whitehouse is T.H.I.R.S.T. Group’s Co-Founder and Co-Owner/Operator of The Drifter Spirits. Whitehouse, along with T.H.I.R.S.T. Co-Founders Claire Bertin-Lang and Maxwell Britten, used his law background to connect people in the industry to legal resources and offer advice on filing insurance claims. T.H.I.R.S.T. Group does not offer legal representation but the organization is able to connect bartenders and businesses to free legal counsel or legal counsel that offers services at a nominal fee.  It is important to note that T.H.I.R.S.T. Group is about more than financial security, it is about morality, justice, and advocacy during a universally challenging time. Businesses and their employees were essentially left to fend for themselves. Rather than accept being left behind, these establishments and individuals must advocate for themselves and their right to be supported in lieu of their financial hardships. T.H.I.R.S.T. Group gives these individuals a chance to demand better for themselves from their respective state legislators during these strange times and long thereafter the pandemic has met its natural end.

During a conversation between 2 OZ Magazine and T.H.I.R.S.T. Group’s Eric Vincent, Vincent expressed a sense of urgency and called for members of the hospitality industry to file their insurance claims.  Though filing one’s claim does not necessarily secure a favorable outcome, it is important to file a claim in order to create a paper trail, to establish legitimacy and to be heard. “As far as we have seen everyone across the board is getting denied,” said Vincent, highlighting a trend of injustice. According to Vincent, the two reasons that people are denied is because the pandemic is not covered in the insurance and because most say that the virus didn’t shut down the industry but it was instead the governors. “The pandemic is not covered because the Coronavirus is not a physical thing that is causing loss or damage,” explained Vincent. “To that point, there is a case for that. One case that is giving us ammunition is in Missouri. There are a hair salon and a few restaurants and bars where they went before a judge and said that it [the pandemic] is actually causing physical damage.”

This “physical damage” accounts for strict cleaning guidelines, the limitation of patrons, the inability for businesses to assume normal operations, etc. The Missouri Case is important to follow because the judge agreed that there was an argument to be made and sent the case to trial whereas most claims are initially denied upon discovery. The case in Missouri also helped others figure out the phrasing that is necessary to have their voice heard and to have their claim argued in court.

T.H.I.R.S.T Group’s main goal is to get the word out and make sure individuals in the hospitality industry are filing their insurance claims. Many insurance companies tell brokers that filing a claim is a frivolous effort, however, people should file regardless of the belief their claim will see court or justice. “As long as you file,” said Vincent, expanding on this point, “you’re in the system. You’re in the books. If you ever go to trial or file a lawsuit or if something changes in our government system, you need to have that claim.”

The Hospitality Industry can save itself. It is up to those within it and those who cherish it to save it from total extinction. Together our voices resound throughout a community and inspire change. Progress is possible if members of the hospitality industry and its friends and patrons demand from state legislators that places like bars, which function as community centers and gathering places, get the respect, and support that they so deserve. It is imperative that local bartenders and businesses file their insurance claims and get in touch with T.H.I.R.S.T. Group to turn the tide and ensure that bars and restaurants survive this devastating time.

To learn more about the T.H.I.R.S.T Group, go to https://www.thirstgroup.org. You may also DM ask_me_amaro on Instagram if you have additional inquiries regarding how to support local bartenders and businesses.