Hispanic Heritage month celebrates the cultures of American citizens whose ancestors come from Hispanic or Latin American countries. Herradura Tequila has always honored its roots, its culture, and its people. This year, Herradura Tequila celebrates the talents of four local Latin bartenders who will create a series of cocktails inspired by their roots, while also telling us their incredible stories.

Today, we would like to introduce their stories and their cocktails. 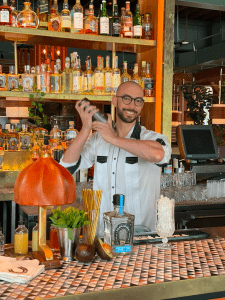 Andy Cabrera currently works as a bartender listening and dancing to Cuban music and keeping his Cuban traditions and roots alive. When he was ten years old, Andy and his family moved from Cuba to Miami. After spending most of his childhood in Cuba, Miami was a completely different world. As he got older and started to find his place, he didn’t care about the world of Mixology at first. He was interested in web development and computer systems. Eventually, he picked up the mantle and took his place as the third generation of bartenders. After giving Mixology a chance, he fell in love with it. Being a bartender gave him a chance to make a name for himself alongside the legacy of his father and grandfather. He named his cocktail, “Santa Marta”, after the town’s name where he lived in Cuba. Farmers would always ride around the town on their bikes. They would sell produce, namely avocados. When they say “Aguacate maduro,” We would say back “Peo Seguro.” This lives in Andy’s memories of his beloved hometown.

Andy muddles the avocado and mixes the ingredients. He also shakes the drink and serves it over crushed ice in a Collins glass with a mint. 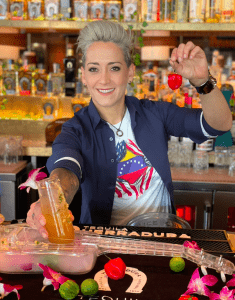 Originally from Venezuela, Barbara Correa has become one of the most iconic mixologists in Miami. “I had to reinvent myself when I arrived in the United States,” said Barbara, who was a lawyer before she became a mixologist. “My challenge was to do everything possible to reach the level of other local mixologists, with my own style and respecting my Latin influences.” Barbara is not only passionate about being a mixologist. She also loves to create unique experiences in each cocktail which delivers the sweetest smile and sense of hospitality. “I love to use Latin fruits and ingredients because they are so flavorful, colorful, and full of aromas,” explained Barbara, representing her roots and revealing the secret to her delicious drink.
This cocktail was inspired by one of the most important songs of the Venezuelan singer-songwriter Simon Diaz. The cocktail is a journey to the Venezuelan Sabana.

Fill with soda water and decore with lime peel and brown sugar cane zest.
The cocktail is posing on the most traditional musical instrument in the country: “El Cuatro” A small guitar with four cords. Inside we find the cocktail ingredients with Venezuelan national flowers, orchids. 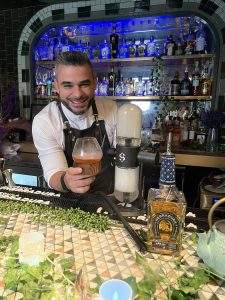 Anthony Medina celebrates Hispanic Heritage Month with pride. He loves being Venezuelan and sharing his heritage with new people. His roots break the ice and allow him to explain how his home country became a bridge to his life in America. After becoming a bartender in Venezuela, Anthony moved to the US six years ago. He has been in the industry for sixteen years, serving as a Spirit educator, a Brand Ambassador, a competitor in various competitions, and a very interactive bartender. Anthony loves offering excellent service to his clients. He values making them feel comfortable and entertained. He loves that his cocktails are able to tell a story. With the Cocktail 360, he is able to tell his own story. “It has different Venezuelan elements that I’ve added, such as papelon, chocolate aromatic bitters, herbal liqueur, and spicy bitters,” said Anthony, revealing his knack for finding versatile flavors. Anthony is known for using a diversity of ingredients that create a perfect balance in his cocktails. The Cocktail 360’s name complements the tool Anthony uses to create his cocktail- a 360° humidifier.
This cocktail is inspired by the time the Tequila spends in the barrels, complemented with a 360° humidifier technique. It’s a nightcap-style cocktail to enjoy before bed. “I’ve added different Venezuelan elements such as chocolate aromatic bitters, papelon, and other unique flavors and aromas.”

White musk and palo santo smoking chips on Stunderglass. Served on a 360 glass 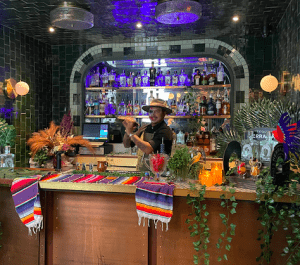 When Will Estrada meets another Latin person, he feels connected to a very strong and supportive family. “We are a very happy culture,” said Will. “We treat each other like cousins no matter where we are from.” The sense of connection influences Will’s bartending and strengthens his love of hospitality. His family also inspires him. From making a “pastel” to improvising new recipes with the available ingredients, Will learned a lot from his mom and his abuelita about cooking ingredients. He improvises most of his cocktails. His cocktails usually come out great as a direct result of his ingenuity. His latest creation, Kak’ik, is no exception! The cocktail is named after a famous Mayan dish that he discovered while living in Guatemala. Will was born in Los Angeles, California, but he grew up in Guatemala. When he returned to the US, he brought some of the best experiences he ever had: family, hospitality, and a deep connection to his Latin roots. The Kak’ik is essentially a soup made with very hard-to-find ingredients. Will leaves the mix of the Kak’ik marinating for 24 hrs to create the flavor and the aromas.

Named after a dish with the same name. One of the most famous Mayan dishes in Guatemala. The meaning of kak’ik in English is “red and spicy” but it has a deeper meaning. The red color of this dish evokes the blood spilled and is symbolic of rebirth.

The cocktail is served in a handmade ceramic cup from Guatemala.

Halloween weekend is the best weekend