CHRISTIAN DELPECH, originally from Buenos Aires, is a true superstar and one of the most innovative and dynamic flair bartending champions in Miami. Winning more than 19 world championships and over 50 first-places in international competitions in more than 40 countries around the world, he’s a living legend, known for his highly original, dexterous showmanship and influential impact upon a new generation of up-and-coming bartenders. We are proud to offer this exclusive interview as part of our National Bartender Day celebration.

Christian is currently teaching flair technique through online platforms, workshops and special events.  You can also watch him work his magic behind the bar at Spanglish and Sweet liberty.

When did your passion for bartending start?

A friend of mine introduced me to bartending when I was 17 years old and working in a pub.  I didn’t even drink alcohol at the time and didn’t know how to make any cocktails.  I was just pouring mixed drinks back then.  I wanted to learn more so I enrolled in a bartending school and that’s when I started to fall in love with bartending.

How did you come across flair bartending?

When I was working at my first job, I saw the movie “Cocktail” and I fell for flair bartending instantly.

Did you come up with these tricks on your own or study other people?

When I started flair bartending, it wasn’t popular in Argentina.  In fact, I didn’t know anybody that did it at that time.  So I learned all the moves from the movie “Cocktail.”  Then I found out, years later, about flair competitions in the US, so I got some videos (VHS at the time) from the world championships and immediately started to practice new techniques from the video and came up with my own moves and style.  I learned tricks related to juggling, contact, dancing, martial arts, and magic sleight-of-hand.  After becoming a pro and world champion, I continued to improve on my own tricks and introduce more ideas. 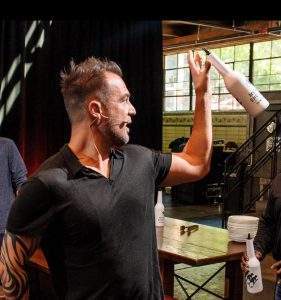 What has been the most memorable experience?
I’ve competed, judged, and performed in over 40 countries, so it’s very hard to name a single one, but probably the one that made me a world champion for the first time: the Pro Division, Legends of Bartending in Las Vegas in 2001. That’s a great memory!

What is something people would be surprised to know about you?

That I was a magician once. I worked doing magic in Ibiza going from table to table. I learned magic from the best magicians in Spain.

What’s your favorite flair bartending competition and why?

It no longer exists but my favorite was Legends of Bartending in Las Vegas because it was the most technical flair bartending competition ever.  There were four different rounds: Pour Test (accuracy), Speed, Working Flair, and Exhibition Flair.  The one who scored the highest in all combined was crowned World Champion.  The competition was invitation-only, with champions from all over the world.  You really had to train for this one, in all the different aspects.  Also, it was in Las Vegas!

In your opinion, what makes a good bartender?

A good bartender maintains an ideal balance between hospitality/customer service, knowledge, technique, and speed (when needed) while also having the ability to empathize with the guest.

What can you tell us about your new phase as an online educator? How did you initially get involved? 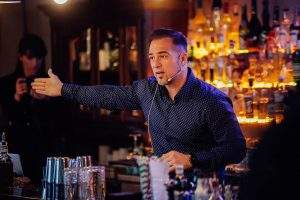 Well, I’ve been training bartenders for two decades, but only recently on social media.  I love to teach people who have a strong desire to learn and if someone goes to your page, YouTube channel, or buys your training videos, it’s because they’re genuinely interested in learning from you.  That is an inspirational fuel for teaching.

What is your advice to novice bartenders wanting to learn flair bartending?

It all depends on what your goal is.  For instance, if you want to learn working flair (to me, that’s the most useful ability) to add skills to your bartending job, my advice is to start with the basic moves, make them very solid and learn moves that you’re going to be able to use/perform in that environment specifically.
If you’d like to become a competitor, then you would have to step it up a notch and train hours a day to learn faster, although the concept is the same, solid base and then train smart.  Often people want to know how long it takes to learn flair and I always answer with another question: how bad do you want it?

Where do you see yourself next?

I’d like to continue in education, training for sure, but at one point I’d like to explore the other side of the bar, which is brand ambassadorship.  If it’s related to education, all the better.