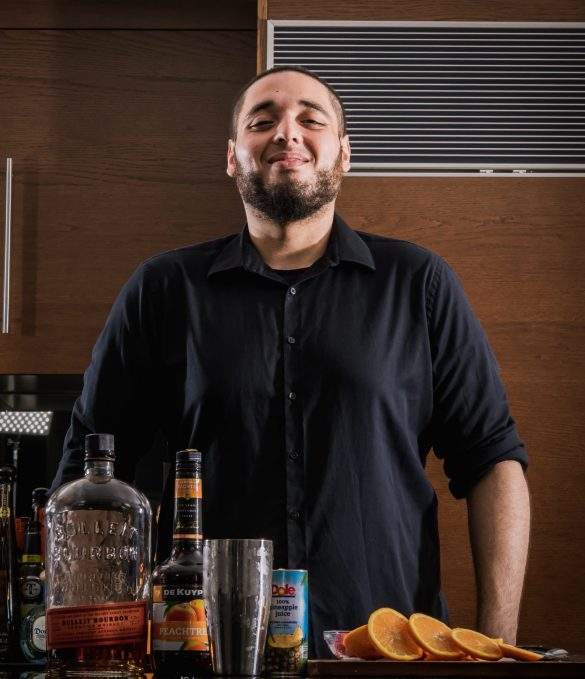 Local Bartender Anthony Lopez is no stranger to innovation, hard work or curiousity. These three characteristics are the pillars of his success in the service industry. After working unfulfilling jobs, Lopez decided to enter the world of food and beverage services. His first job was at The Raleigh Hotel in Miami Beach where he was noticed by Carlos Moreno Rossi. Rossi, who is currently an event Coordinator and Beverage Director at The Delano Hotel/SLS South Beach, approached Lopez because of his unparalleled work ethic. Rossi was so impressed with Lopez that he welcomed him as a part of his bartending team. Lopez began working with seasoned bartenders who trained him and got him interested in the craft.

What do you enjoy about bartending?

Bartending is an ever evolving industry. I love seeing new takes on the craft. Some bartenders are doing the same thing that I’m doing but, in other parts of the world, they have access to different ingredients, different spices and different spirits and so there is always something new coming up. People are always coming out with new techniques and so you can never say that you know how to do everything. Bartending constantly challenges you so it is something that is always changing and I really like that.

As a bartender, what have you learned from people in this industry?

In the industry, people can tell whether or not you’re motivated. People can tell whether or not you like what you’re doing or if you’re just doing it as a job. People noticed that I started paying attention to what they were doing. I would ask certain questions. I constantly tried to figure out more about my craft and I wanted to continue to expand my knowledge. Those around me saw my passion and realized, “This kid actually cares about what’s going on and we’re gonna show him everything.” The bar would close around three or four in the morning, but I would often stay after we closed to learn. Back when I worked at The Raleigh, I hung out with another bartender named Peter Bocskor who had been bartending for over 14 years. He took me under his wing and showed me how to make different drinks. He would show me how to make cocktails, like Manhattans Vieux Carre and Rob Roy’s. I told him that these are the best drinks and I asked why no one ever asks for them. He let me know that not a lot of people know of them.

What are your favorite drinks?

I like Manhattan and Brooklyn cocktails. They’re both take on classics and they’re honestly some of my favorite drinks. The Brooklyn cocktail is not something everybody appreciates because it’s a little on the stronger side. It’s very spirit-forward and very straightforward.

Do you have any remarkable opportunities/ stories that have happened because of your job? If so, what are some of these experiences?

There are many stories that I take with me and that I’ll probably never forget. Some of my favorite events have been when I was bartending at The Raleigh. I’ve done a lot of events like food and wine festivals. I’ve met high-profile Michelin Star chefs and I’ve worked alongside the clientele that they’re catering to so I’ve met a lot of famous people. I’ve taken care of Tommy Hilfiger and Sam Nazarian (Creator of SBE and Owner of SLS Delano Hotels ) when they would hold meetings at The Raleigh. I met Snoop Dogg. I’ve worked a lot of concerts with DJs like Anjunabeats, Marshmallows and Thomas Gold. Those crowds were something! I am really happy that I got a chance to experience those events, especially with everything that’s going on now.

What are your current projects?

I recently started a consulting gig with a good friend of mine named Rudy Abreu. Rudy and I are partners in our consulting agency. We are beverage consultants for bar programs and for at home bars. It’s a side gig to bring the bar to people. We bring the craft to their house instead of teaching people how to make a Long Island or a mojito, we make the fun stuff and teach people how to make craft cocktails at home. We make the experience approachable. I’m also heading the bar program at the Albion Hotel in Miami Beach.

How has COVID-19 affected you personally and professionally?

We are all trying to survive in this market. We have all gone back to the drawing board. We cut costs down and worked to figure out how to change menus but also how to stay alive. We still need to keep people coming in the door, so that’s when we fall back on the classics. I obviously feel bad for everybody that’s having a hard time. It’s also been a  huge struggle because like there’s kind of this bias versus stand-alone bars and restaurants. Restaurants are okay but bars have been struggling to open. People don’t want to encourage gathering right now. Avoiding crowds has been the biggest challenge for me. All I know is how to fill up a room. I am trained to fill a room and I’ve perfected this craft to be able to get a lot of people to want to come in and enjoy it. But, you just have to take what you are given and roll with it. I don’t think that this pandemic will completely disrupt the cycle of the bar industry or stop it in its tracks. We got through prohibition. There are also families suffering and I wish people would be a little more safe. It’s important to take care of ourselves so we can get back to what we were doing and live a normal life.

Where can we see more of you? What’s your next move?

After working eight years in the hospitality industry, I’ve been inspired to create my own business. My business is called Cosa Nostra Cocktail Club. Cosa Nostra, or “Our Thing,” will also be the name of my bar. Although it reminds some people of the mafia, I chose the name because I’m Cuban-Italian and I’m from New York City (which is considered a birthplace of true craft).  I’ve created this LLC with Rudy Abreu who also bartends at SLS. Cosa Nostra will be a cocktail club to set us apart from the dive bars and from the regular bars. Once you’re considered a cocktail club it’s because you offer a little more variety not just mainstream classics as far as the cocktail programs. We use our knowledge of pre and post prohibition styles of bartending to create this brand because we realized that we care more about the craft cocktail side of the industry. We keep up to date with all the spirits that are coming out and we notice how our guests really experience drinks. We are also happy to show them how these drinks became staples in the craft. “Our thing” goes to show that we’re going to be different from everybody else. Cosa Nostra will not be an experience you can get by going into any other bar