Tremendo Garnish Founder and Bartender Angel Gomez, aka Angel de la Blanca, originated from Ecuador. In 2009, before becoming a bartender, Angel pursued a postgraduate degree in Argentina. Looking for work while he completed his studies, Angel became a cook in a restaurant. One day, his manager asked him for assistance in bringing supplies to the restaurant’s bar area. After seeing Angel’s hospitality skills at work, his manager gave him an opportunity to be his assistant at the bar. His manager explained everything he knew about the bartending profession and how the career had a lot to do with service. Angel had a lot of potential because of his own value of helping people and tending to their needs. Angel’s manager also taught him about wine and Gin because he was English and Gin was a part of his culture. It was this friendship that introduced Angel to the world of cocktails. He was so enamored with this world, with the hospitality industry, that he forgot about his graduate degree and became a bartender. He is currently the founder of Tremendo Garnish which he started during the pandemic and he sat down with 2ozMag Founder Helena Jose to discuss his booming new business. 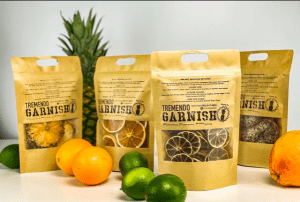 Despite the pandemic’s previous threat to the hospitality industry and its professionals, Tremendo Garnish has been a successful business because of Angel’s passion, ingenuity, and dedication. However, it was a long, difficult journey to that point. “It was a crucial moment,” said Angel, referring to the COVID-19 pandemic. “The bartenders and the cocktail union suffered a lot as well as other unions.” Angel’s job also suffered because they were used to receiving customers and generating an entertaining environment that could not reach its full potential during the pandemic. In fact, Angel went straight into survival mode during the pandemic. He got a job at a construction company, but quickly realized that his heart and his expertise remained in hospitality. “I saw many colleagues developing their own ideas,” said Angel. “Based on my experience, I had the opportunity to create a brand called Tremendo Garnish, which is a product that bartenders use to decorate cocktails.” 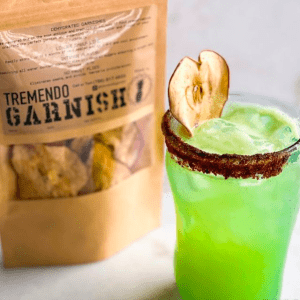 Angel noticed that there was a need that existed in his profession that he could offer and thus improve life for his fellow bartenders. He developed his idea and created Tremendo Garnish. With Tremendo Garnish, Angel created a series of garnishes, decorations that bartenders place on cocktails, to satisfy the need for bartenders to create unique, artistic drinks. According to Angel, Tremendo Garnish works on the design and modification of garnishes and makes artistic proposals through dehydrated fruits and other elements for the bartender. “We massify the creation of the bartender, which usually takes time to create and replicate that detail,” explained Angel. “We save him a workload, because many times that detail is aimed at up to hundreds of cocktails, through Tremendo Garnish, we can save [the bartender] the extra work and time he spends doing it. We deliver the garnish ready to use.”

Tremendo Garnish offers aesthetic solutions for cocktails. Dried, seasonal, and exotic fruits characterize their garnishes. They have dragon fruit, golden dragon fruit, kiwi, macadamia, blood orange, limes, oranges, and many other flavors. “The first line we took was with dehydrated fruits which is an ancient technique that currently takes us to another level,” said Angel. “The dehydration technique allows us to preserve the fruit. Previously, there was a problem in the cocktail bar because perhaps the fruit was beginning to rot and we did not know, or we had to waste it and throw it away.” As a result of the dehydration, the fruit garnish maintains its condition better and lasts up to six months. The dehydrated fruit also maintains its appearance because it is not wet or decomposing. With this garnish, the bartender has an opportunity to add more elements such as spices, syrups, etc. They can place gold on the garnish, or other herbs and have a more captivating finished product. Angel added, “We also have our own creations, such as edible gold lamination, CBD gums, emulsions, and soon a line of 6-7 salts inspired by Mexican culture, such as “Sal de gusano” (worm salt), Sal de Hormiga (ant’s salt), chipotle salt, and others.”

Angel and his success as the founder of Tremendo Garnish reveal the payoff in trusting one’s intuition and developing one’s passion. Find Tremendo Garnish at around 70% of the bars in Miami or visit their website at www.tremendogarnish.com for more information.

Unfiltered Hospitality – Educating one bar at a...