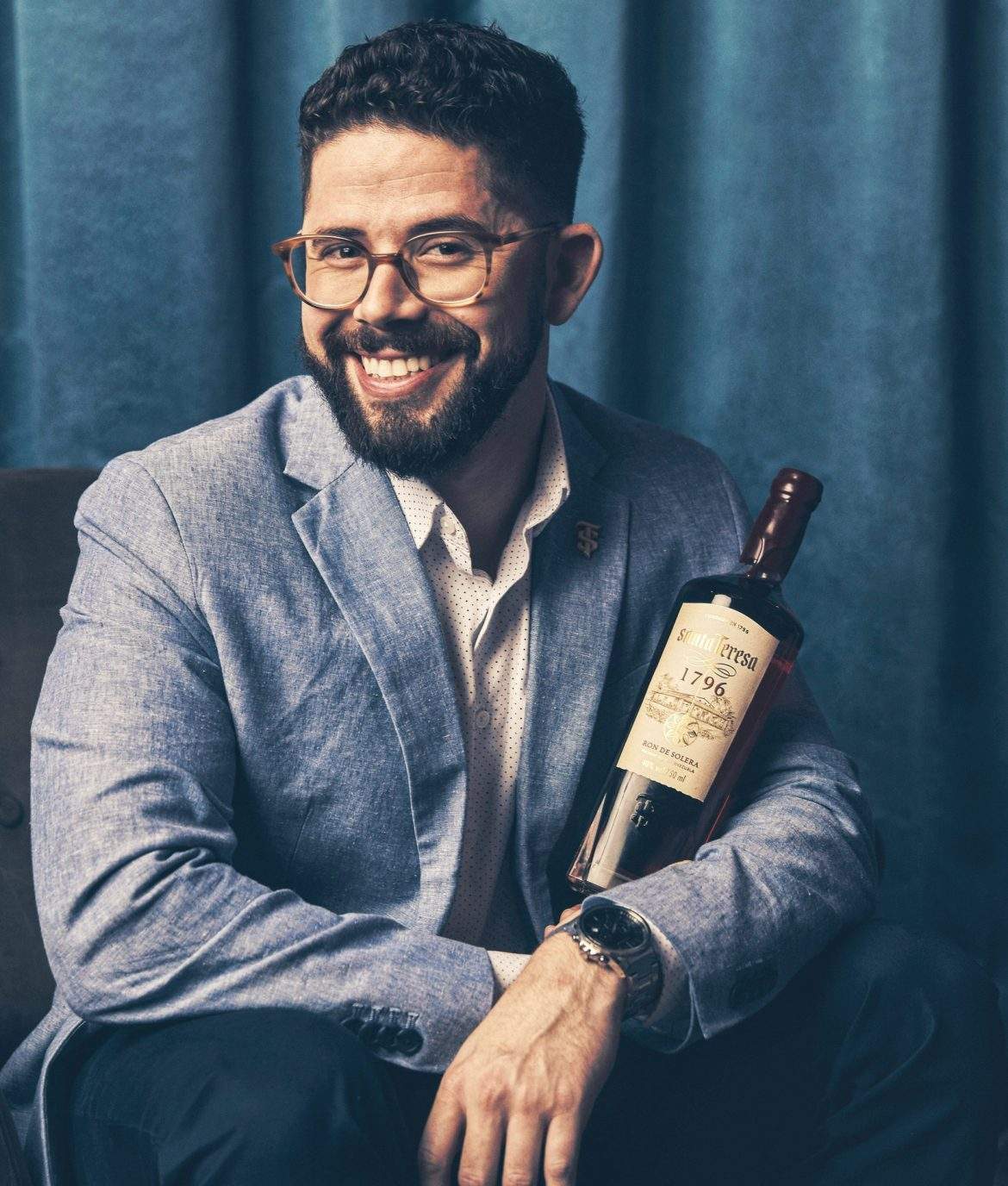 Santa Teresa Rum Ambassador Alex Noriega knew he wanted to become a member of the hospitality industry by the age of sixteen. Noriega did not know the word “Brand Ambassador” then, or where exactly he would fit in the industry, but that simple dream situated him for success. When he went out to eat with his family, Noriega would look at liquor bottles at places like Coral Gables’ Houston’s and dream of one day working for a brand. It was because of his hard work, his inability to accept the word “no,” and his natural talent in the industry that ultimately led to the actualization of Noriega’s dream to work for Bacardi.

How did you get started in the hospitality industry?

I ended up working at Houston’s when I was nineteen years old. My sister worked there and she got me a job. I couldn’t believe it. I truly believe in the power of thinking and in the power of working at something until it comes true. During the first year, I hated working at Houston’s. It was a very militant, hard-core style. But I grew to love it when I got good at my job. I met my mentor Matthew “Matt” Kuscher who is currently the owner of Local and Spillover in Coconut Grove as well as Kush in Wynwood. He left Houston’s and promoted me. Houston’s became Hillstone. Once I got behind the bar, I realized that this was something I was good at. I left Hillstone because I felt like my career was stagnant and I wanted more.

What was your journey as a bartender?

I thought I was a good bartender until I went to South Beach and got into Mixology. I had no idea what Mixology was. I started seeing all these tools, different spirits, cures, and syrups. I realized that I was a tier two, tier three bartender. It was a whole new world. There were so many flavor profiles. I started becoming a tier-one bartender. I learned a lot from the people around me. That’s when I met brand ambassadors. I would never see these guys at Houston’s or Hillstone and now I know why. It’s a corporate restaurant so you wouldn’t see brand ambassadors there. Brand Ambassadors are mostly found in craft bars.

Where did bartending lead you next?

As a bartender, I started competing locally. I got involved in a chapter called the United States Bartenders Guild (USBG) here in Miami. I would compete in small local competitions for the experience. I won these little competitions and gained some clout. I saw a whole new world where people took bartending seriously. I got really into it. I met more patrons and bartenders. I got offers from part-time ambassadors. Luckily, I had good mentors who told me to stay away from small brands because they weren’t going to pay me or they would offer me the world but only sign me on for six months. That was the reality of the beast. I worked at several bars. I read. I wrote. It wasn’t until 2014 that I started getting more confident in my skills. I started opening a bunch of spots. I was part of the main crew that opened up the bar, Beaker & Gray in Miami. In 2016, I also started working at Thompson Hotel where I met a cocktail mentor.

In which competitions did you participate and how did your participation influence your career?

My first big competition was the 2015 Hennessey Academy Competition. I crushed it and won first place all around. After the competition, I kept getting offers but ultimately wanted to work on my craft. I kept bartending until I was able to find the right place. The Bacardi Legacy Competition came up and I made it to the regional semi-finals. That was my biggest competition ever. Unfortunately, I didn’t make it to the regional finals. But there the ambassador role started to change. I became an account manager to Rémy Martin which is similar to the brand ambassador role.

How did you get started as a Brand Ambassador for Santa Teresa Rum?

During my three month stint, I got a call from Bacardi.  In January 2017, Bacardi picked up a new rum which was Santa Teresa Rum. They hired me in June. I was a local brand ambassador with them. In the past three years, the brand has grown tremendously. I started locally and then became a state ambassador. I grew the brand tenfold in the first year. I created thirty cocktail menus in thirty different restaurants. I am now the senior brand ambassador.

What is it like to work for Santa Teresa Rum? What do you enjoy the most about your job (education, partnerships, events, etc.)?

I love this brand. This brand speaks to me because I had a troubled childhood. With this brand, we smile back at adversity. We have a project called Project Alcatraz. My mentor, Ray Raymond, has been with the brand for ten years. He told me about Project Alcatraz when he interviewed me for the job. Project Alcatraz was founded in 2003 and it is a project that rehabilitates gang members. It all began when gang members broke into the hacienda to steal guns. They got caught but the CEO of the company, Alberto Vollmer, believed in second chances. He gave the gang members an ultimatum: work for me for food, water, and a place to stay or go with the police for stealing from me. The gang members took the deal because these were the slums of Venezuela. They loved working for Alberto and had a chance to change their life. Now, we help these guys by combining vocational training, formal education, and psychological assistance. We also play sports; We play rugby. It shows companionship, strength, and togetherness. To this day, we have helped in over twenty prisons in Venezuela. We have rugby youth leagues in the hacienda to keep kids going. We have sustainability projects. Our main focus is on the community. We have another project called Casa Blanca. We rebuild the houses in neighboring villages. A lot of the guys love it so much that they help for free and now it’s safer there.

What have you learned about Rum that fascinates you? (the flavor, the product, the company, the industry…)

I love that rum is that it’s the rebel of all the spirits.  Think about it: Pirates drink rum.

How has COVID-19 affected you personally and professionally?

When the pandemic began, I was on paternity leave. It was a challenging adjustment but we were able to figure it out. For me, I’ve been able to focus more on myself. I read more, work out, and spend time with my wife and kids. I smile back at adversity.

What’s a significant goal of yours?

My goal is to become a mentor. I believe in paying it forward. I would love to see someone break out and become someone huge in the hospitality industry. I want them to be like “I would like to thank Alex for helping me get this Michelin Star” and for me to tell them “hey, you did it. I just gave you the tools.” That’s my dream: being a mentor to one or several people. I love to teach which is why the role of ambassador fits me. I am an educational role model. You’re never going to make anything on your own. I believe in never stopping learning and helping others. If you are a smart guy, help the younger ones. I don’t know who an ignorant person helps.

Jon Mendez – Luxury Over Everything